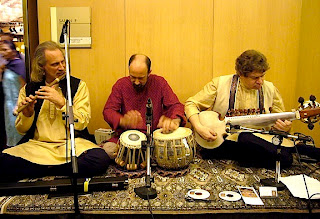 Image Credit: indianmusiclosangeles.com
No celebration in India is complete without some ‘naach gaana’, which basically means song and dance. There are songs for happiness, sadness, romance, heartbreak and everything in between! Most Indian weddings comprise of a variety of different functions and occasions and there’s a song or rather a multitude of songs, to go with every one of them and it is integrated into every emotion of the event as well!
Wedding music in the country spans many different kinds of melodies from traditional wedding folk songs to the more popular Bollywood movie music. Many communities traditionally have different instruments that are played during weddings like the shehnai; the soulful sound of shehnai is a trademark in many sentimental scenes in Bollywood wedding movies as well!
In wedding functions like the Sangeet or the Mehendi you often find women playing dholkis / dholaks or small drums and singing lively folk songs and in the Baraat there is often a band hired that the entire groom’s party dances to. During the bidai when the bride is going to bid goodbye to her family, there are often songs about the importance of family and pain of her leaving that are sung or played.
In Gujarati weddings there is often a dandiya or raas garba event, where the women sing and dance to the special garba music or you find the more muted melodies of Carnatic music in some southern weddings. Singing hymns as part of the ceremony or around it is a common practice in some religious communities as well.  In Bengali weddings you will find the custom of ululation where the women make a loud rolling sound accompanied by conch blowing. It is almost like Indian wedding events have their own special soundtrack all over the country!
Now, the most popular wedding music is undoubtedly film songs and those from Bollywood movies are always popular in many weddings.  Just these movies alone provide enough songs to cover every wedding part of the from the haldi ceremony to even the honeymoon. Dancing to these songs is a much-awaited part of the entertainment and a lot of couples also opt to hire choreographers to put together a professional dance performance.
We would love to know what music you plan on having for your wedding celebrations!
Posted by The Indian Wedding Blog at 4:30 PM