Indian Bridal jewelry comprises of many traditional and intricate ornaments, with various ornaments for beautifying every part of the body, from head to toe. One of the most captivating features of an Indian bride is her hands! Tightly clasped with intricate henna patterns and various pieces of jewelry is a classic photograph in the wedding album.
So, I decided to put together a list of a few ornaments to deck up your hands and arms, as an Indian bride! 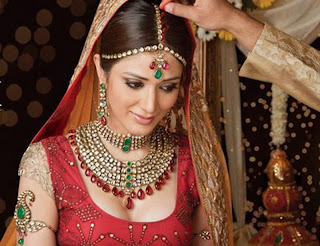 The bajuband (or armlet) is a piece of traditional jewelry, worn snuggly around the upper arm. It is found in many variations and can be worn by men and women both. It is also believed that pendants hung from the bajubandh can be added to ward off the evil eye!
In India, bangles are considered the symbols of marriage. Available in endless hues and designs, these can be worn in different combinations to match your clothes. Bangles symbolize different things in different cultures. Some brides wear red and green glass bangles as red symbolizes life and joy, while green symbolizes fertility. 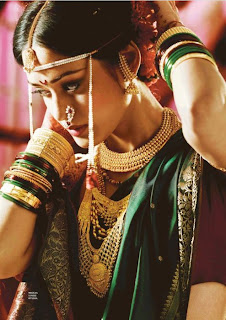 (Image Courtesy : Tanishq)
The chuda is a set of red and ivory bangles worn by the Punjabi bride. The kalire is a hanging ornament made of gold or silver, which is tied to the chuda. 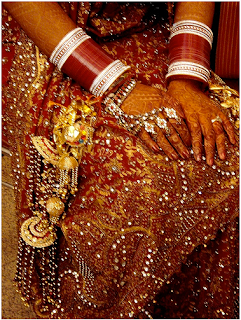 (Image Courtesy : Paromita Deb Areng's)
The kada is a broader version of a bangle and is available in different styles, encrusted in precious and semi precious stones. Brides often opt for a single, broad, encrusted kada rather than numerous bangles. 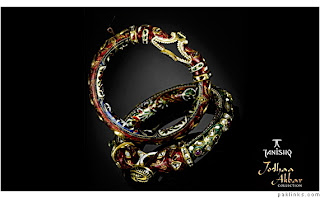 (Image Courtesy : Tanishq)
The hath phool also known as the panja, this is a unique piece of jewelry that sometimes adorns the hands of an Indian bride. It consists of one or five rings, which fit over the fingers and a bracelet, which is worn around the wrist, both joined together with chains of gold or beads. It is usually worn on both the hands and lies on the back of the palm. The ornament is traditionally made of gold, but can be customized with gemstones to match the bride’s clothes.
The arsi ring is, traditionally, a thumb ring with a tiny mirror for the bride to peep at herself and her groom. In the Mughal era, the arsi ring was a flat, jeweled mirror fitted on a thick ring and supposedly worn by brides so they could sneak a look at their bridegrooms' faces!!
Posted by The Indian Wedding Blog at 3:58 PM