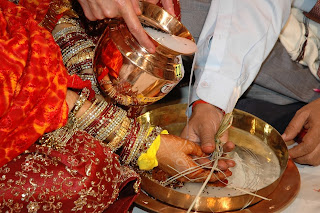 Indian wedding celebrations are deeply rooted in religious beliefs and family ties. There are various wedding related rituals and ceremonies, which may or may not be superstitious and are usually carried out to repel bad influences, bring good luck or simply to add some fun to the celebrations. Here are some of them:

The bride's bright wedding clothes are worn as positive omens for her new life. In some weddings, when the groom arrives on his horse, he is usually accompanied by a male cousin or nephew who accompanies the bride and groom on their trek to the ceremony. He is a symbolic knight to ensure a safe and felicitous marriage and future.
In Gujarati weddings, as the bride's mother welcomes the baaratis at the door, she will try to pull the grooms nose, and this is just to tell him to take responsibility of her daughter!
Jaimala or the exchange of garlands represents that the bride and groom accept each other as partners in life. It also represents their respect for each other. The groom is then fed with sweets to welcome him to the bride's family and as a sign of respect.
The fire in the havankund during a wedding ceremony symbolizes the god of Fire. This is done so that the bride and groom’s commitment to each other can be witnessed by the fire god. Offerings are given to the fire to invoke blessings for the married life.
The Gath Bandhan involves placing of scarves around the bride and groom, who are then made to walk around the ceremonial fire. The two scarves are then knotted together as a symbol of the bride and groom's eternal bond and their pledge to be faithful to each other.
In many Hindu weddings, there are rituals where the groom’s shoes are hid and are returned only in exchange for money. Another similar custom takes places at the end of the wedding ceremony, when some of the ladies may try to pull the groom's nose, and if one of them succeeds the groom will try to get hold of her sari. Truce is achieved only after some compensation is provided. This doesn’t hold any religious significance but is a very fun filled custom.
The Bidaai is the last ritual, for it marks the point when a bride leaves her old family and is embraced by her new family. The bride throws a handful of rice and coins behind her, as she leaves to signify that she is repaying her parents for all that they have blessed her with.
Posted by The Indian Wedding Blog at 6:15 PM