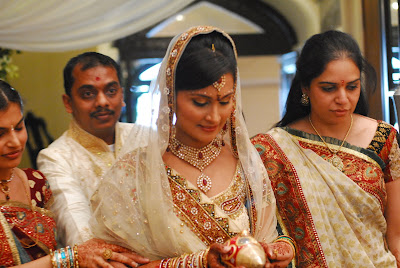 There are various wedding entrance procedures followed all over India. In the old days the bride entered in a DOLI - a palanquin carried on the shoulders of four carriers. The custom of the Doli entrance is still in widespread existence in rural parts of the country. On the urban wedding front the bride sometimes makes a grand entrance in a fancy palanquin. In general the Doli entrance in modern weddings has disappeared with the bride now making an entrance on foot.
The bride always makes an entrance after the groom has arrived for the ceremony and has been seated. The Dulhan Pravesh has variations all over the country both in terms of the manner of entrance as well in terms of who accompanies the bride to her would be husband. While in North India she is accompanied by her brothers, cousins and friends, in some parts she is brought in by her maternal uncle.
The entrance is stately, sometimes with flower sprinkling girls accompanying the bride and her aides. A cloth held from all four sides by her accompaniers is generally held above her head. The significance of the cloth is again different all over India. During the Dulhan Pravesh at some weddings the bride on entering sits behind a white curtain while a puja is conducted. This is followed by the Varmala when the curtain is removed. In some of the other ceremonies the bride moves straight to the Mandap for the Varmala (when both the bride and groom garland each other). This is also sometimes called Jai Mala. The actual wedding commences after this.

At many Indian weddings there is a stage erected where the bride and groom meet after the bride entrance for the Varmala. This is followed by dinner and photographs. The wedding then takes place late evening only in presence of close family members.
Posted by The Indian Wedding Blog at 6:10 PM